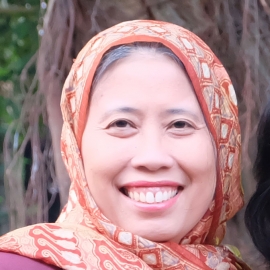 Chusnul Mar’iyah is a Senior Lecturer in Department of Political Science Universitas Indonesia. She is the founding member and the President Director of Center for Election and Political Party Faculty of Social and Political Sciences Universitas Indonesia. She is a former Commissioner of the Indonesia Electoral Commission 2001-2007. She completed her PhD in University of Sydney, Australia in 1998 with dissertation topic on “Urban Political Conflicts: The Redevelopment of Inner Sydney”. She is a member of Pimpinan Pusat A’isyiyah (Women Wing of Muhammadiyah, Indonesian National Organisation). She has actively involved in democratization and women movements as founding member of the Indonesian Women Coalition for Justice and Democracy, 1998; Perempuan PeKa (Women for Peace and Justice), 1999; the Transparency International Indonesian Chapter, 2001 to name of few.