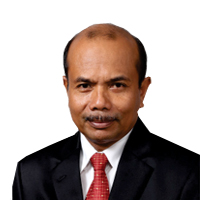 Andrinof Chaniago is a lecturer in Department of Political Science Universitas Indonesia. He is currently on leave as he has been appointed as Indonesian Minister of National Development Planning/Head of National Development Planning Agency (Bappenas) since October 2014. He is a founding member of the Center for Indonesian Regional and Urban Studies (CIRUS) in 1999, and CIRUS Surveyors Group (CSG) in 2008. He was also one of the founding members of “Visi Indonesia 2033” (Vision of Indonesia in 2033), an independent think-tank in Indonesia. He continued his study in Fu Hsing Kang College, Taipei, Taiwan where he obtained the Diploma of the National Development Courses (2004), and had attended various short courses and trainings, among others: Economic Globalization, at Wuhan, China (2007); Taiwan Economic Development and Planning, in Taipei, Taiwan (2006); Sustainable Urban Development, in Touyuan City, Taiwan (2004), and Conflict Mediation, in Oslo and Troms O, Norway (2003).

Chaniago, Andrinof A. The Failure of Development: A Review of the Collapse of the New Order.
Jakarta: LP3ES, Jakarta, 2012